Many thanks to you all!

The fund-raising campaign in May this year raised more than 5000 euros. I transferred the proceeds to our associates in India in June.

India announced a peak level of new infections seven months ago. The German TV news programme “Tagesschau” reported on 1st November that the situation was now a lot better. According to Delhi’s health minister Satyendar Jain, the numbers are looking good, and a current study investigating the presence of Corona antibodies had concluded that overall 97% of people now have antibodies. “Virtually everyone has been exposed to the virus and has antibodies. And if we don’t have any serious mutations in the near future, then we don’t expect a new pandemic wave either.”

The chairman of our Indian partner organisation, Mr Ramesh informed me by phone that they are now seeing significantly more people being treated for the side effects of the vaccination than for infections. The Goshala Trust has been working tirelessly to manufacture an Ayurvedic medicine from a variety of wild herbs and spices that they have harvested themselves, and are dispensing it free of charge to those who need it.  The so-called Anandaiah medicine supposedly provides effective protection against COVID-19 and should heal an infection. In any case, there are no severe side-effects, and after a maximum of five days the patients are testing negative again. The trustees are distributing the Ayurvedic medicine free of charge or at cost price.

Thanks to your donations Sankranti e.V. was able to support this initiative. Additionally, food and financial aid was distributed in the cow enclosure in Goshala to particularly badly-effected people (see photos). 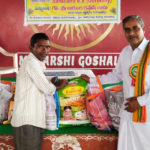 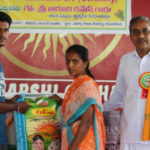 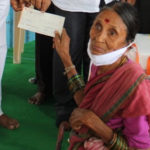